Perched on a stool in what appears to be a quintessential English pub, the Churchill Arms – but upon closer inspection is adorned with antiquated objects mixed with Irish signs, flags and other references to Irish culture – I engaged in the Brexit debate, on the eve of Remembrance Sunday. Communicating my personal truths, calmly, with nothing to gain and nothing to lose was emboldening. My internal and external being met, married and settled upon the affirmation: remaining in the EU is about our commitment to peace.

As we wrestle with unknowns, the fact that a blind vote is being regarded as a democratic determination of our commitment to the European Union is particularly galling. That we were asked to vote on something based only on assumptions – without even the politicians being privy to what a so-called Brexit might actually look like – is ludicrous. But alas, here we are, an apparently ‘woke’ millennial and a born-and-bred sixty-odd year old Londoner from Portobello, trying to make sense of what it all means. 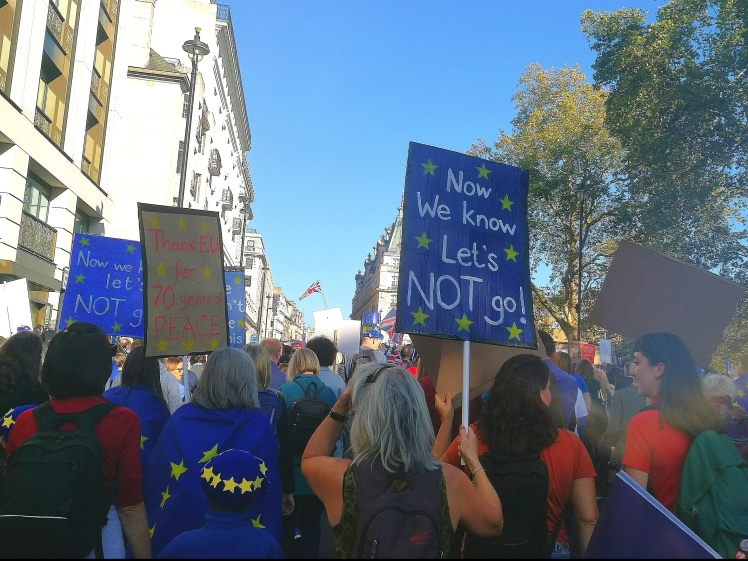 “Young people are just afraid, they don’t know what it was like before – sure, there might be some bumps in the road but it won’t last long,” Mr D says without a trace of doubt as he argues for the ‘Leave’ vote. It’s true, I am afraid. But I have no interest in going back in time. To understand that this is an entirely regressive course of action, you have to first understand why the establishment of the European Union was progressive – and how much we have gained from it.

“What do you think?” He asks, eyebrows raised, physically opening up the debate. I assess my options: a) to avoid conflict altogether b) to vaguely outline the well-trodden ‘Remainer’ path c) to offer up a heartfelt, personal opinion and cast caution aside.

“For me, economics aside, this is all about peace…” I began.  The European Union was established to create lasting peace, stability and prosperity in Europe in the wake of two bloody world wars. It is highly symbolic, imbued with layers of meaning that appear to have been lost along the way – perhaps thanks in part to years of politicians ‘EU bashing’.

The First World War was deemed the most deadly in human history with around 16 million civilians and soldiers killed – the mechanisation of war from 1914 was a key factor in this. A second world war was unthinkable but alas with a fractured continent rife with far-right populism, guns were blazing once again in 1939, bringing the reality of warfare into urban areas with increasingly sophisticated arsenal. It’s estimated that between 60 to 80 million people lost their lives. It was off the back of these wars that the European Union was established, banishing the horror stories to history books in favour of a less turbulent, more cohesive Europe.

Today, war is something that happens in far-away places. Images and video footage is readily available for us to witness, share and unite in our outrage – but we don’t connect this type of reality with our own. It is utterly alien because within the European Union, we have been protected from it by a supportive, united framework that ensures we work together, not against each other. It means we are a stronger force on the global stage, in the face of external threats. We all share in the desire for peace.

The vote to leave the European Union shows that many don’t understand the true value of peace anymore. The leave vote demonstrates a relative cockiness – like a reckless teenager, pushing boundaries, defying the lessons taught in favour of learning them for themselves. At a time when the flames of right-wing populism are being fanned around the world, when geopolitical tensions are being exacerbated and climate change stalks our over-populated planet, the idea that we should ‘go it alone’ is quite frankly terrifying. More than ever, we need to come together for the common good and collectively put out these fires.

The significance of this conversation on the eve of Remembrance Sunday did not escape me. Every year, I remember my Grandpa, who lost three and a half years of his life as a prisoner of war building the Burma railway in Thailand – and suffered until the end of his days with what we now know was PTSD. This year, I also remembered my other Grandad, who grew up listening to Doodle bugs ticking over-head, played with evacuees from London and shared his woodland haven with German Prisoners of War. As their generation gives way to life’s cycle, the experiences of war are washed away, too. And so the much repeated phrase, ‘Lest we forget’ becomes more pertinent: have we already forgotten and would we be on the cusp of Brexit, otherwise?

When I stepped down from my soap box, Mr D turned away from me before saying defensively that I should be a politician – and then highlighting his poor education as a hindrance to the discussion. It is true that Brexit is an education issue. The elder generation that benefited from the prosperous years following the war did not have the same access to education that we have today. The quality of information available by way of education prior to the referendum was poor. But those politicians that led us down this dark path cannot claim ignorance. Similarly, you cannot educate those who do not wish to learn.

Talking about Brexit is not easy – for fear of offending, or due to its intimidating complexity – but it is key to bridging those tribal gaps that have formed, with understanding. We are all free to express our own opinions, but they don’t need to be stagnant or shouted in order to gain credibility. By listening to one another, they can evolve from all sides, and that does not denote defeat. Whatever way we voted, we’re all in this together – we share the same history and we’ll share the same future. And for this reason, we should all share the same desire for peace.

*No Remainer or Leaver was hurt in the making of this post (we shared a pint and said good night!)